Get Social with the Platforms! WarnerMedia Kids APAC – 3 Feb 2021 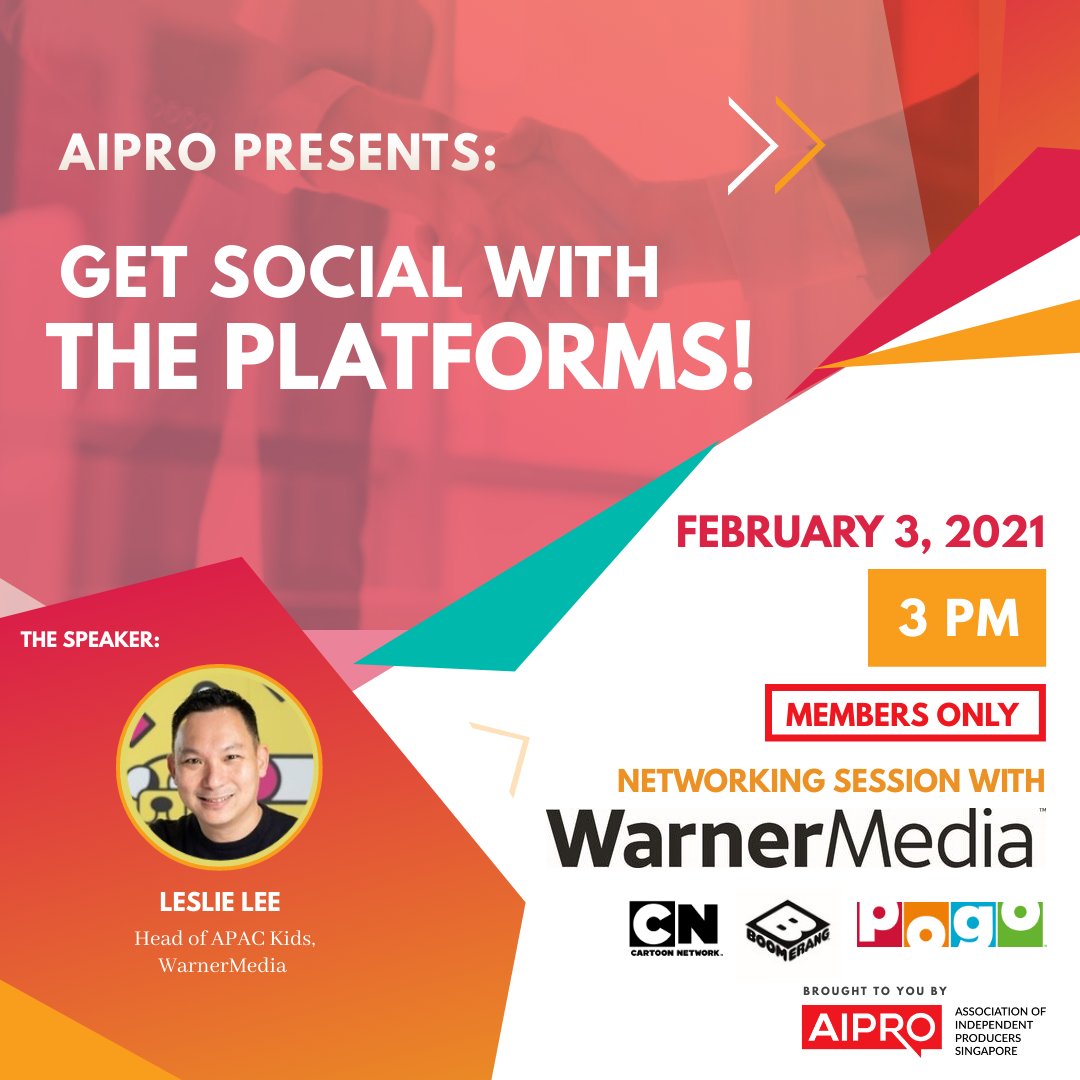 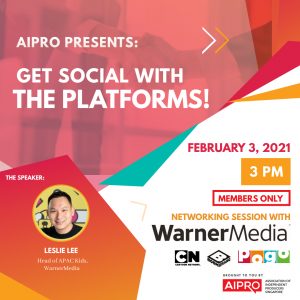 Hi Members! AIPRO is delighted to kickstart our first ‘Get Social with the Platforms!’ session with WarnerMedia! We would like to invite all members to come join us as this online members-only networking session to hear from Leslie Lee, the Head of Kids APAC, WarnerMedia.

Based in Singapore, his role includes the programming, operations, brand and franchise management, and content direction for the three brands. He also oversees the original production and development team, as well as the branded content, digital and games units.

Leslie has over two decades’ experience and expertise in the entertainment industry in Asia, across marketing communications, programming, channel management, animation development and media distribution. His career includes spells at MediaCorp, Viacom and he was most recently Executive Director of Media Networks at The Walt Disney Company (Southeast Asia) – a company he joined in 2007.

He presently volunteers his time mentoring media students in various Singapore-based institutes of higher learning, sits on the programming committee at the Asian Festival of Children’s Content and is a board member of Centre 42, a non-profit arts organisation that supports playwriting in Singapore.

Cartoon Network is available in 17 languages and in more than 135 million pay-TV homes in 29 countries throughout Asia Pacific. Internationally, it is seen in 192 countries and over 400 million homes, and is an industry leader with a global offering of the best in award-winning animated entertainment for kids and families.

Companion channel Boomerang provides light-hearted and fun moments, showcasing a mixture of internationally recognised comedy and fantasy series to more than 144 million households worldwide, including 34 million in Asia Pacific. Favourites include Tom and Jerry, Mr. Bean, Grizzy and the Lemmings, Scooby-Doo, My Little Pony and The Looney Tunes Show.

Launched in 2004, POGO is a leading kids’ channel featuring content that spans multiple genres from comedy and art, to games and curiosity. The channel is home to popular homegrown shows like Chhota Bheem, Super Bheem and Titoo – Har Jawaab Ka Sawaal Hu. POGO is available in South Asia only in Hindi, Telugu and Tamil.

In Asia Pacific, these brands are created and distributed by WarnerMedia International. WarnerMedia is a leading media and entertainment company that creates and distributes premium and popular content from a diverse array of talented storytellers and journalists to global audiences through its consumer brands including: HBO, HBO Max, Warner Bros., TNT, TBS, truTV, CNN, DC Entertainment, New Line, Cartoon Network, Adult Swim, Turner Classic Movies and others. The organization also includes Xandr’s suite of advanced advertising solutions designed to help to improve advertising for brands, publishers, and consumers.