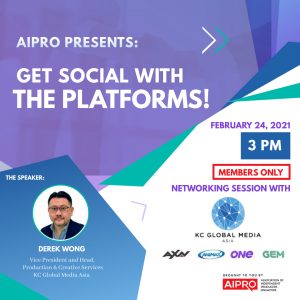 Hi Members! Get ready for our next ‘Get Social with the Platforms!’ session with KC Global Media! KCGM boasts premium pay-TV channels in South-East Asia and Korea, that includes AXN, Animax, South Korea’s ONE and Japanese entertainment channel GEM.

Derek is the Vice President and Head of Production & Creative Services based in the company’s Asia Pacific headquarters in Singapore, overseeing all production and creative aspects for the organization, including original productions, on-air promotion, post-production and commercial production services. With more than 25 years of television content production experience in both long and short form, Derek is responsible for some of the most successful television formats ever produced in Asia, including The Amazing Race Asia, Apprentice Asia, Asia’s Got Talent series, Cyril Simply Magic and MN All-Stars. The over 50 television content projects he has under his belt have received numerous awards and recognition across the region.

Derek started his production career in the Hong Kong film industry and subsequently moved to the television sector with Hong Kong TVB and STAR TV. He relocated to Singapore in 2002 to join Sony Pictures Television Networks, Asia, where he established the Commercial Production Services unit for Sony’s flagship channel AM. The unit was responsible for providing creative production solutions and branded content for advertising clients. In 2004, Derek ventured into long-form entertainment content and started the Original Production Division, leading AXN to become the English cable and satellite channel to pioneer original productions within Asia.

Derek holds a Bachelor of Applied Science in Mathematics and Computer Science from Swinburne University of Technology.

KC Global Media Entertainment LLC is a global multi-media company based in the United States. The brainchild of former Sony Executives Andy Kaplan and George Chien, KC Global Media Asia is primed to be Asia’s leading entertainment hub through the production, distribution and programming of quality, ground-breaking content.